Before the show was canceled, this housewife’s secrets started to be exposed. Her husband is still doing his thing. I know, he looks like a foot, so it’s hard to imagine, but I guess the money makes him cute? Long story short He’s still doing his thing, but so is she…. It’s messy. Wish they showed this, maybe they’d still be on television. Allegedly. 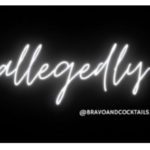 ← Ex housewives on a mission… The scandal! →